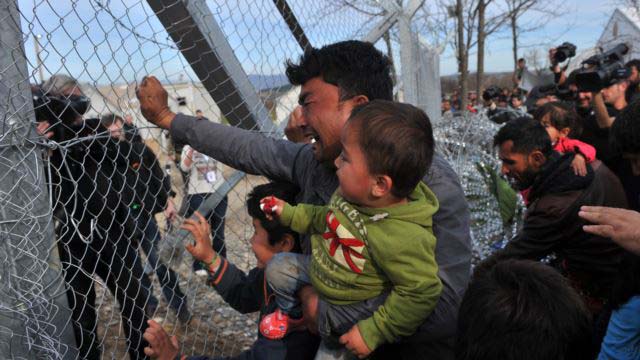 The European countries have tightened border control, which most of all impacts Afghan migrants. The European countries have distinguished the migrants and thus they have prioritized the Iraqi and Syrian migrants over Afghan migrants to cross European borders. Therefore, on 24 February 2016, 135 Afghans voluntarily repatriated from Germany to Afghanistan[1], and according to the Afghan embassy in Germany, around 1000 other Afghan migrants have requested to be returned home. They are the people whose asylum applications have been rejected by the German government.

According to the “Los Angeles times”, a famous American newspaper, one third of the migrants in Europe are Afghans. And due to the tight border control, at least 5000 Afghans are stuck at Greece-Macedonia border.

Migration to the industrialized countries

Afghans have a long history of migration and the Aryan migrations is the proof of it, But in the “modern history”, Afghan migration to the industrialized[2] and neighborhood countries began after the communist coup d’état on 27 April 1978 (7 Sour 1357) and after the Soviet invasion of Afghanistan.

After the withdrawal of the Soviet forces from Afghanistan, the country became exhausted by civil war and the country’s economy was also destroyed; therefore, migration to the industrialized countries increased. From withdrawal of the Soviet forces from Afghanistan until 2001 the number of the Afghan migrants increased to 54620. It should be mentioned that these numbers show that the Afghans who were not granted the citizenship of the host countries and were only counted as migrants. In this phase a great number of Afghans immigrated to the European countries because of economic and political problems in their own country and most of them gained the citizenship of these countries.

The Afghan migration to the neighboring countries also began after the “Sour coup d’état” and with the soviet invasion of Afghanistan it reached to its climax and After the Geneva agreement in 1988 the Afghan migrants began to repatriate.

The significances of the migration issue

Besides that, there are also around one million internal displaced persons and thousands of Wasirestani refugees inside the country. Afghan migrants all together form one fifth of all the population in Afghanistan. Therefore, due to its human, legal, political, security and economic aspects the migration is of a great importance to the Afghan government along with the issues of peace and security in the country.

Afghan migrants toward Europe in 2015

According to the statistics of the “International Organization for Migration” from January 2015 to 27 January 2016, a number of around 1.103496 million people have arrived to Europe by land and see routes and after the Syrians, Afghans are the second outnumbered migrant nation. [3]

If one studies the number of the Afghan emigrants who arrive to Europe by illegal ways, one will find out that this number has unprecedentedly increased. According to a study conducted by European Union, around 26215 Afghans had claimed asylums in various European countries in 2013, in 2014 this number was 41370 and in 2015 it rose to 250000.

In 2015, due to the deteriorated security situation hundred thousands of migrants from Syria, Afghanistan, Iraq and Northern and central African countries arrived to Europe and thus the “migration crisis” began in Europe. Therefore the European countries have tried to forcefully expel the economic migrants.

German Interior Minister Thomas De Maiziere in his visit to Kabul said that he has come to an agreement with the Afghan government about the repatriation of those Afghan refugees whose asylums applications were rejected in Germany. He also said that the Afghan migrants are not counted as refugees because the situation in Afghanistan is relatively better and there are safe places in Afghanistan.

The Afghan governments position about the refugees

However the neighboring countries have agreed to this policy of the Afghan government but they have not taken necessary measures to implement it and in this regard the Afghan migrants are facing major problems. For example the Pakistani police arrested 1100 people accused of terrorism, 600 of which were Afghans.

But in this regard the Afghan government has had contradictory positions as the position of the presidential office is far different than that of the Ministry of Refugees and Repatriations.

Any agreement about the forceful deportation of the Afghan migrant will add to the problems of the Afghan government because the arrival of every Afghan to the European countries costs an estimated 5 to 8 thousand American dollars (in this regard Afghans have spent $1.25 to $2 billion only in 2015).

Third: the families whose head was granted asylum in the host country earlier;

Fourth: the families whose heads are women;

Fifth: the families without a caretaker.

[2]  European Union, Australia, Japan, United Kingdom, and the United States of America are among the industrialized countries.

[4]Read the report of BBC here: