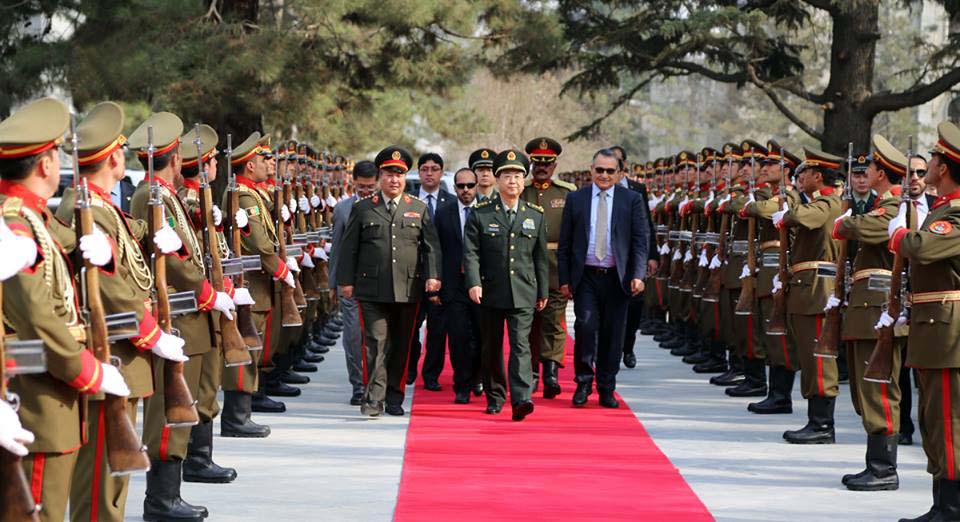 According to a press release by the Presidential Palace, in his meeting with Ashraf Ghani Fang Fenghui promised to attribute 480 million Chinese yens (around $73 million) to Afghan military. He also proposed an anti-terrorism plan which requires the joint struggle of Afghanistan, Pakistan, China and Tajikistan against terrorism.

The Chinese Military Chief’s visit to Afghanistan was warmly welcomed. This visit indicates that China is now more inclined to Afghanistan than the past.

After the formation of the Afghan National Unity Government (NUG) which direction is the Afghanistan-China relation heads? What are the impacts of the Chinese Military Chief’s visit to Kabul? And what happened in this visit? These are the question we will analyze in this part of the analysis.

The Kabul-Beijing ties after the formation of NUG

Following the formation of the NUG the senior officials of the two countries increasingly visited each other’s countries and thus Kabul-Beijing ties were improved more than ever.

In his first foreign trip Ashraf Ghani went to China where Chinese officials promised an attribution of $329 million to the Afghan government. After this visit China started to play a better role in the Afghan Peace Process. Later the Afghan Chief Executive Officer, Afghan Interior Minister, Afghan Defense Minister and the Afghan Foreign Minister also visited China. On the other hand, the Chinese Foreign Minister, Members of the Chinese Cabinet, Chinese Vice President and Chinese Military Chief officially visited Afghanistan.

In the Afghan Peace Process, first, Chinese officials invited Qari Din Mohammad a member of the Taliban’s political office in Qatar to China, then hosted Urumqi meetings and in the Murree direct talks with the Taliban this country had attended as an observer, but in the quadrilateral meetings china played a far significant role in the Afghan peace process.

The Kabul-Beijing ties in security and military fields have also improved compared to the past years. Several security agreements were signed between the two countries according to which China would train Afghan police and border forces and would build doors to Kabul to secure the city; and now the country has promised the attribution of $73 million to Afghanistan.

Chinese Military Chief’s visit takes place at a time where two Chinese economic projects (“one belt one road” and “China-Pakistan economic corridor”) are being applied in the region.

On the other hand, Afghanistan is located at a “Geo-Strategic” and “Geo-Economic” intersection and China is aware of the risks of an insurgency strengthen or rule in Afghanistan and due to 90 km border of its an unsecure province with Afghanistan the country is conscious about the situation in Afghanistan.

Therefore, China being aware of the significance of a secure Afghanistan, wants to have military cooperation with Afghanistan, and that is why the country wants to form an anti-terrorism alliance with Tajikistan, Afghanistan and Pakistan which are the key countries to secure its projects and its Sink yank province.

China and Russia; the regional players of Ghani’s anti-terrorism struggle

From the very beginning of its formation the NUG has made efforts to improve its relations with the regional countries besides the US and NATO; therefor besides improving its relations with China, Kabul has started diplomatic effort to improve relations with Russia. The Afghan Vice President General Abdul Rashid Dustem visited Russia and demanded anti-terrorism military and technology aids; later the Afghan Parliament members also visited Russia and had the same demands; the Afghan government also offered the proposals to buy MI-35 aircrafts from Russia.

The Afghan Defense, Interior and Foreign Ministers have also demanded military assistance from China in their visits to China and now that the Chinese Military Chief has come to Kabul, the Afghan National Security Advisor Hanif Atmar asked China to assist Afghanistan to strengthen its air forces. And according to a source in the Chief Executive Office, China has asked a list of the military demands of Afghanistan.

It seems that besides the international collations the NUG seeks to gain the anti-terrorism support of the regional countries. Whether how successful will Kabul be in this policy, is a question to which, the time will answer.