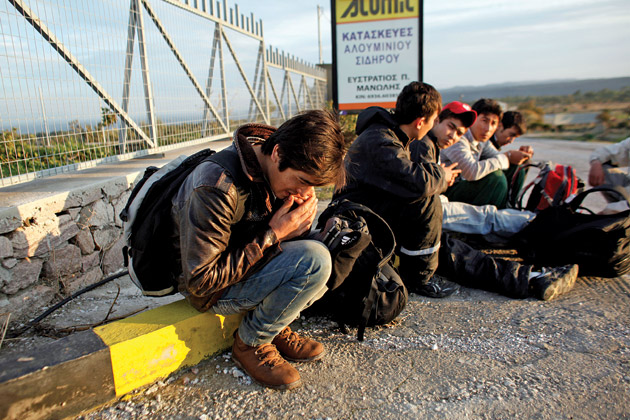 According to the western media, 80000 Afghans will be deported under a secret European Union plan[1]. Afghan refugees are dealing with various problems in Europe, therefore; members of the Afghan Parliament summoned the Afghan Minister of Foreign Affairs, Interior and Refugees and Repatriations on April 6, 2016.

Recently the Afghan President has also taken a tough stance on the Afghan migrants who flee to Europe and on the other hand, EU and Turkey have also made an agreement to repatriate the migrants who reached Europe from Turkey.

Based on the statistics of the International Organization for Migration (IOM), of the 1.187 million migrants and refugees who reached Europe since the start of 2015, more than 240000 are Afghans[2]. According to a report of the Washington Post close to 180000 Afghans applied for asylum in Europe in 2015[3], earlier, the Afghan minister of Refugees and Repatriations had said that about 250000 Afghans have applied for asylum in European countries. Meanwhile, within the past one year, Turkish Police have detained 3600 Afghans who were trying to go to Europe through illegal ways and hundreds of others were drowned in the Mediterranean Sea.

The background and the reasons behind the Afghan migration to Europe, the various stages of EU policies about migrants and the stance of the Afghan government on the Afghan refugees are the issues that are analyzed in this part of the weekly analysis.

The background of the Afghan migration to Europe

In 2014 and 2015, a vast number of Afghans headed to Europe through illegal ways. In 2014 58000 Afghans reached Europe and in 2015 where the numbers of the asylum seekers from the war torn countries were unprecedentedly increased in Europe, 240000 Afghans also had also arrived Europe. (For further information see the Chart-2) Why do Afghans go to Europe?

Insecurity and Political instability: more than 30002 Afghans including military and civilians were killed and injured in 2015 in Afghanistan. In a country with a population of around 30 million this amount of casualty is catastrophic. Besides that, internal differences in the government and 50-50 division of power between the leaders of the National Unity Government (NUG) has made the political situation of the country very fragile. Thus Afghans disappointed of the stability and peace in Afghanistan and with the hope of having a secure and peaceful life in Europe, headed towards Europe.

The worsening economic situation: After the end of 2014 on one hand, financial support of the International community to Afghanistan decreased and Foreign NGOs ended their work in Afghanistan and on the other hand due to the concerns about the condition of the country after 2014 a large amount of capital fled the country. Thus, unemployment increased in Afghanistan and the economic situation worsened. The value of Afghani decreased from 50 Afghanis against one US dollar to more than 68 Afghanis against one dollar. Thus economic condition was also a reason behind the migration of Afghans to Europe.

Migrant reception in Europe: although, unfortunate war circumstances, political instability, unemployment, and poverty are the main reasons behind the Afghan migration to Europe, but when Germany and some other European countries showed a favorable attitude toward migrants, a vast numbers of Afghan migrants headed toward Europe.

The policies of European countries

In the past few years due to war, insecurity, poverty and some other reasons people from Middle East, Afghanistan, Northern and South Africa migrated to Europe. The vast amount of migrants, their fatalities and difficulties on the way to Europe led the migration issue to become a crisis in Europe.

First stage: in this stage each European country had separate stances on migrants. Germany opened its border and announced that it will accept 800000 refugees; England on the other hand was pursuing a though policy about the migrants. But when the photograph of the Syrian boy was published vastly in the Media, European leaders softened their positions about the migrants and showed green light to the migrants.

Second stage: since migrants were increased in the coastal states (Greece, Italy and other neighboring countries) the members of EU agreed on quota system to deal with the migration issue. According to this system the migrants were being distributed among EU countries. Thus the migrants would were being moved from Italy, Greece and Hungary to the other EU member countries[5].

Third stage: after the attacks in Paris and Brussels once again the EU countries changed their policies and EU signed an agreement with Turkey, according to this agreement for each migrant that returns from Europe one Syrian refugee from the Turkish migrant camps will be moved to Europe. The deal was applicable after March 21-2016.

It should be noted that, European countries have always counted Afghan refugees as economic refugees and reasoning that situation is relatively better in Afghanistan they have not accepted most of the asylum application of the Afghan asylum seekers.

Recently, Germany with the assistance of a health organization have created a website (in twelve languages including Persian and Arabic) to inform migrants about the western liberal culture. Due to the unawareness of the migrants about the European values, sometimes they have even committed sexual misbehavior. This step comes after the reports about sexual harassment of women by migrants.

The position of the Afghan government

On the other hand the Ministry of Refugees and Repatriations has declared that repatriation of the minors, disabled migrants, households headed by a woman and Afghans living in regions in war[8].

The future of the Afghan migrants in Europe

Those portion of the Afghan migrants who are granted asylum in Europe may live in better conditions but that portion of the Afghan migrants who have passed difficult paths to Europe and in this way they have spent a large sum of money and those who have even sold their properties in order to go to Europe; if they are to be deported in Afghanistan they would face lots of difficulties and will put the Afghan government under a tremendous pressure.

[2] Thousands of Afghan migrants have hit a dead end in Turkey, Economist, 2016-April-5.

[3] Europe wants to deport Afghan migrants but Kabul is reluctant to accept them, Washington Post, 2016-March-17.